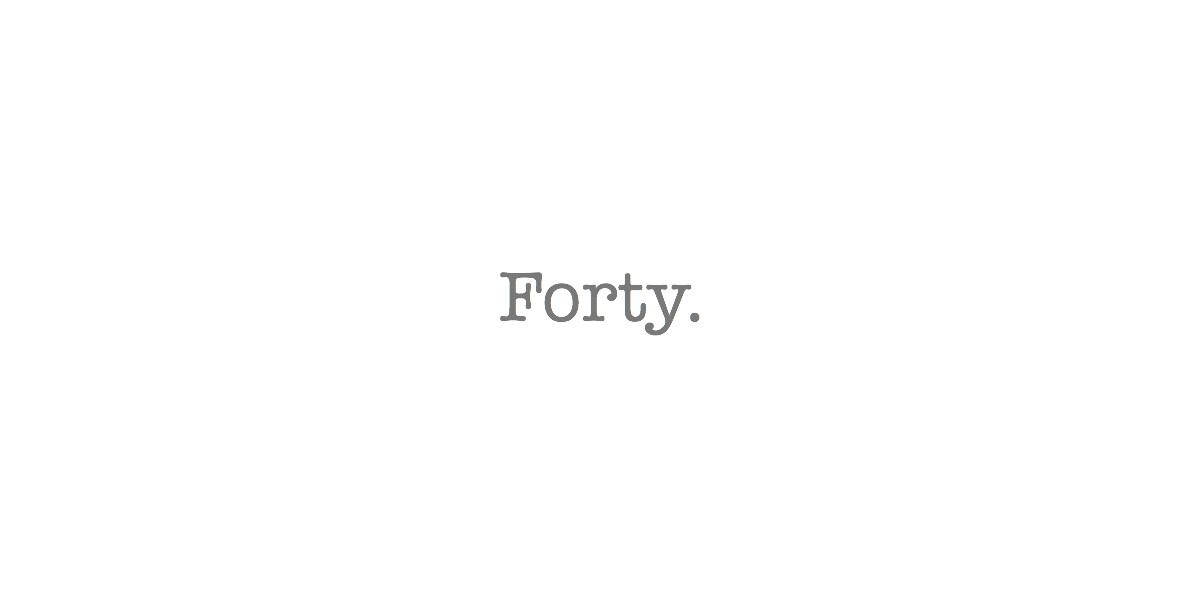 It’s hard for me to believe it, but another year has passed and it’s time for another birthday post on this blog. For those of you that are new here, I’ve marked each of my last six birthdays on this site with a special birthday-related post.

When I turned 35, I shared 35 Songs That Meant Something To Me.

When I turned 36, I shared 36 Photos of Places That Meant Something To Me.

And last year, I wrote about 39 Lessons I’ve Learned.

That brings us to today – my 40th birthday.

It would seem obvious to take a milestone birthday like this one and look back at some memories or wax poetic about what it means to be four decades old – but that’s not really my style. While admittedly, it’s a little tough to wrap my head around being 40, I feel like I’m really just getting started and so I decided to look at 40 from a different perspective.

Rather than seeing it as an end of something, I see it as a beginning and feel like I’ve got a foundation in place to do some amazing things with the rest of my life. In thinking about that, I got curious about what other people I admire have done with their lives after 40, and what I found was pretty inspiring.

So, I decided to compile some examples of things that people I admire have done AFTER their 40th birthday. Each of the people on this list have inspired me in various ways over the years and, to be honest, writing this post has changed my perspective a bit on what 40 means.

The accomplishments listed below are certainly not all of their successes, and in some cases they may not be what most people consider their best work. But each of them are things that have inspired or impressed me personally.

Here, in alphabetical order, is a look at what 40 people I admire have accomplished after they celebrated their 40th birthday…

Chris Anderson acquired the TED conference, shifted its mission to “ideas worth spreading,” and began posting its presentations online attracting billions of views.

Anthony Bourdain had never written a book or appeared on television before he turned 40.

Mel Brooks made Blazing Saddles, History of the World, and Spaceballs among other movies – he had never made a movie before he turned 40.

Steve Carell landed his starring role in The Office.

George Carlin had never done an HBO special before he was 40.

Johnny Cash recorded with Rick Rubin and U2. He also became the youngest person ever inducted to the Country Music Hall of Fame.

Mark Cuban sold Broadcast.com to Yahoo, made a fortune, used that to buy the Dallas Mavericks, won an NBA championship, and became a TV star on Shark Tank.

Rodney Dangerfield effectively re-launched his comedy career, made movies like Caddyshack and Back To School, and gave comics like Sam Kinison their big break.

Alexander Dumas wrote The Count of Monte Cristo and The Three Musketeers.

Benjamin Franklin hadn’t begun to experiment with electricity and had no involvement with politics before he was 40.

Seth Godin published several books that have been incredibly influential on my career and life including Tribes and Linchpin.

Dave Grohl produced a pair of documentaries including Sound City and the amazing Sonic Highways.

Phil Jackson had never had an NBA head coaching job until after he turned 40.

Jay Z teamed up with Kanye West for Watch The Throne, launched the Made In America music festival, and launched his own sports agency.

Steve Jobs returned to Apple, led the company back from the brink of death, and developed the iMac, iPhone, iPod, iPad, and so much more.

Kevin Kelly was hired to become editor of Wired magazine and published his 1,000 True Fans theory.

Tony Kornheiser launched Pardon The Interruption and had a stint as a Monday Night Football announcer.

Marc Maron launched his WTF podcast and transformed his career.

Steve Martin made movies like Three Amigos and Planes, Trains, and Automobiles, and hosted The Oscars.

Barack Obama had just lost a Congressional election when he turned 40.

Joan Rivers made her first appearance on The Tonight Show.

Sir Ken Robinson delivered the most viewed TED talk of all time.

Bill Simmons launched Grantland and the 30 for 30 ESPN documentary series.

Bob and Sheila Spector (my parents) sold their house and moved across the country where they built a new house, moved to a beautiful town where they knew nobody, and created an amazing new life for themselves – much closer to their sons (but not too close).

Steven Spielberg made Jurassic Park and Schindler’s List among almost 20 films released since his 40th birthday.

Howard Stern left terrestrial radio and attracted millions of listeners to his show on satellite radio.

Pharrell Williams released the songs Happy and Get Lucky.

FacebookTwitterLinkedInEmail
So, The Oscars Happened.
Don’t Let “Work” Get In The Way Of Work

Thanks for that,,,wish you had turned 50 so I could see that list