Yesterday was my birthday. For those of you that are new here, I’ve celebrated my birthday on this website the past couple years with a special post.

When I turned 35, I shared a list of 35 Songs That Meant Something To Me On My 35th Birthday.

When I turned 36, I shared a list of 36 Photos of Places That Meant Something To Me On My 36th Birthday.

This year, I’ve come up with something a little different.

In honor of my 37th birthday I plan to donate money every day for the next 37 days to 37 different causes, charities, people, and projects that are doing things I feel are valuable, interesting, or important.

I’ll update this page as I go and if any of you are inspired to contribute to any of these places as well, that would be great. If not, that’s fine too.

Also, if any of you have suggestions about worthy projects and causes that you think I should consider supporting, please tell me (and my readers) about them in the comments on this post. I’m sure there’s lots of stuff out there I don’t know about and I’m doing this one day at a time in the hopes that it will give people an excuse to spread the word about other cool projects I (and/or my readers) can help out.

Here’s the breakdown of my donations so far…

Sparklab is the creation of a group of six Stanford students who are turning a bus into a mobile lab that will travel to various middle schools and give students the opportunity to have a creative, hands-on learning experience that their schools currently are not equipped to provide them with.

Matter is a new independent, long-form journalism initiative that’s being designed to promote quality reporting about science and technology with no interference from advertisers.

IAVA (Iraq and Afghanistan Veterans of America) is the country’s first and largest nonprofit, nonpartisan organization for veterans of the wars in Iraq and Afghanistan. With more than 200,000 Member Veterans and civilian supporters nationwide, IAVA is building the next greatest generation with a three-pronged model based on advocacy, awareness, and assistance.

The Tutu Project was started by a photographer named Bob Carey whose wife has been battling breast cancer since 2003. It’s a collection of photos of himself in a pink tutu that’s being turned into a book whose proceeds will go to breast cancer organizations. It’s oddly compelling and a worthy cause. Here’s an example of his work: 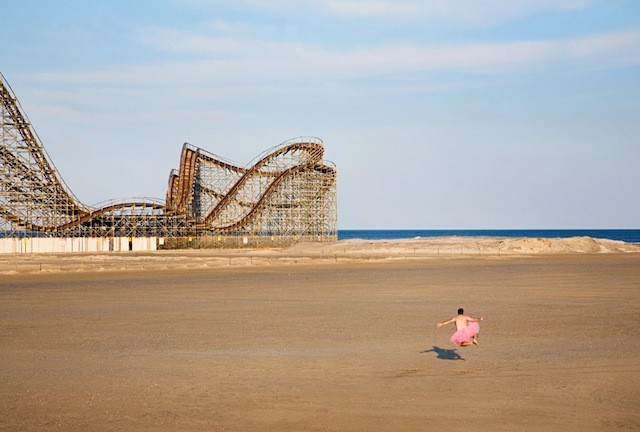 Little Kids Rock is a national nonprofit that partners with schools to bring music education and instruments to schools in an innovative and relevant way.

Donation 6: The Future Of Work

The Future of Work is a web series designed to showcase stories of the obsessive makers, innovators and entrepreneurs that are leading the way to a new wave of business. People who aren’t waiting around for the job market to change, for broken industries to repair themselves, or for government to become more functional. They’re taking matters into their own hands, forging a new approach to work, one that is not just about making a living, but about building a life that is distinctly theirs. It is an optimistic yet pragmatic counter-narrative to the bleak picture painted by the mainstream media.

Khan Academy is a nonprofit organization dedicated to providing a free world-class education to anyone anywhere. It was recently featured on 60 Minutes as you can see below, and it’s doing some pretty amazing and forward-thinking work to reinvent education.

I can’t imagine him actually losing an election to Mitt Romney, but better safe than sorry.

A couple designers designed an award-winning storage product which for reasons I don’t quite understand nobody wanted to put up for sale. So they’re trying to do it themselves. This is the future of business.

I listen to Marc Maron’s WTF podcast every week and just realized that I’ve never given him a dime for the (literally) hours of enjoyment I’ve gotten from it. Now seems like a good time to remedy that.

As somebody who grew up playing basketball in Chicago, this proposed documentary about Chitown basketball caught my eye – hopefully I can help make it a reality.

As a kid who grew up before video games were elaborate and before the Internet brought smut to your living room, the game Leisure Suit Larry seemed like the greatest creation of all time. Now, apparently the game’s orgiinal creator is raising money to re-create a modern version of the game. I’m in.

I use WordPress all the time (including to produce this site) and often I use themes that are developed by other people who make them available for free despite the hours of work they put into them. Recently, I’ve been using some products by Theme ID and I’m happy to give them a donation as a small thanks for the great work they do.

Donation 14: Before I Die

Before I Die is a community art project that is quickly spreading across the country. It invites people to share their hopes and dreams with the world by completing the sentence “Before I Die I Want To…” on a chalkboard in public spaces.

The V Foundation, named for former college basketball coach Jim Valvano, continues its cancer research work. And if watching this infamous speech doesn’t make you want to donate some money, then nothing will.

Instapaper describes itself as an online service that “facilitates easy reading of long text content.” I describe it as possibly the best free application on the Internet and one of the few I literally use every day. I’m more than happy to donate to them in appreciation of the great product they’ve created.

The DIY Daily is a free daily email compiled by Brian Thompson that features a collection of really great links to articles about digital marketing and the changing business of the music industry. It’s a daily must-read for me, and something of an inspiration for me in the creation of my own Connected Comedy Daily email.

One of my favorite recent Internet happenings inspired this donation. You can read the whole backstory here, but long story short: A cartoonist had his work ripped off by a shady website, the website then sued him (of all things) for $20,000. He then turned to his audience to raise money with the promise that it would go to charity instead of the crazy company that was suing him. He wound up raising $20,000 in 64 minutes and has gone on to raise $192,000 so far – which is now going to a trio of charities.

Donation 20: Fight For The Future

Fight for the Future is an organization dedicated to “protecting and expanding the Internet’s transformative power in our lives by creating civic campaigns that are engaging for millions of people.” It’s an increasingly important cause as the forces of evil (read: businesses and governments that don’t “get it”) are increasingly trying to ruin what makes the Internet so great.

There might not be anybody that has been more influential in my career without ever actually meeting me than author/genius Seth Godin. I love everything he does, and I’m thrilled to donate to his latest experiment, a project he’s launched to “show my publisher, the bookstores and anyone with a book worth writing that it’s possible to start a project with a show of support on Kickstarter.” Count me in.

This one has to be the most “fun” of the donations I’ve made so far because as a result of my donation to this local school program, I was able to go see Weezer play a charity gig at the Roxy. And, it wound up leading to another donation that I didn’t expect…

I wound up with an extra ticket for the Weezer charity show, but couldn’t find anybody to give it to. When I got to the show, there was nobody else in line except for a nice couple in front of me that had a problem – only one of them had a ticket. In a bizarre twist of fate, the only other person in line with them (me) happened to have an extra ticket so I was able to “donate” it to them. They were huge Weezer fans and I’m pretty sure it made their night.

A very good idea, with very interesting charity organizations. Happy 37 and keep up the good work!

Would you consider Angel’s Gate, a residential, non-profit home for special needs animals? There, animals many of whom are terminally and/or critically ill or physically challenged, come to live out their days in peace, dignity and love.

Thank you for “paying it forward” on your birthday! I know you will receive the gift of joy from this altruistic act!

DonorsChoose.org provides a national forum for teachers to submit project for needs in their classrooms. With drastic budget cuts in education, this has become a vital source for pencils, even! I’ve focused on high poverty inner city schools in the South Bronx but have given to all over the country. Warning, it’s like popcorn. : )

Also, Room to Read.org is buildings schools and libraries in the developing world. 300 million children do not go to school. Illiteracy is a global issue. RtR also has a Girls Education Program to keep girls in school. $200 provides a uniform, bike, books, healthcare, a mentor, and more for a year. Literacy is the root. It can ultimately solve other isssues as knowledge is transferred.

NextGenerationNepal.org is the first NGO to reunite traffiicked children with their families. It’s paving new ground about this hideous problem. Read “Little Princes” by Conor Grennan. A good (and fast) read that explains in an entertaining way the issue. I have gone to Nepal and seen firsthand the work. I can attest to its remarkable mission.

TheThailandProject.org was started and is still run by two people. Fighting the issue of statelessness in Thailand and getting traction. This, too, is a global issue. It feeds into the slavery, trafficking issue and education. Stateless people cannot go to school (or do anything else therefore forced into appalling situations) We can’t turn our back.

Winetowater.org Doc Henley was a CNN hero in 2010. Water. Need I say more?!
These have been our favorite charities so far. We have done the due diligence on all and find them compelling. Their founders are absolutely committed and passionate.
It will be with great interest I will follow your 37 days. HAPPY BIRTHDAY
What a marvelous idea! You’re still a pup. : ) “It takes a long time to become young” – Picasso

How about making a donation to WE-ACTx to celebrate your 37th birthday? The viral Kony video and subsequent events inspired a lot of discussion and whatever we learn about Africa, mass murder, activism, social media, and fact checking, action for social justice is still important.

Here’s what I think people should do: 1) volunteer and support projects that improve lives in our own communities and 2) donate to effective international organizations that make people healthier, better educated, more self-sufficient and happier. WE-ACTx (www.WE-ACTx.org) was established after the Rwandan genocide and it does all of that.

This is your best idea…ever!
What an inspiration.

Here’s an idea – how about a donation to an organization whose mission is to preserve ad promote a very important part of American history and culture. I am the dir of mktg for the National Pinball Museum in Baltimore. We are a legit 501(c)(3) non-profit, and, although we really aren’t saving any lives or forging a peace on earth, our educational and community outreach programs and our great new building just off the inner harbor provide our public with an interesting look at their culture and a great place to have fun.

Think about your priorities, and then step out of the box for a minute. Thanks, Josh.

Can you possibly give money to the human fund care of Brian Naftaly. If not that, please keep enough money on hand for the clipper fund. I swear I don’t even know you anymore?