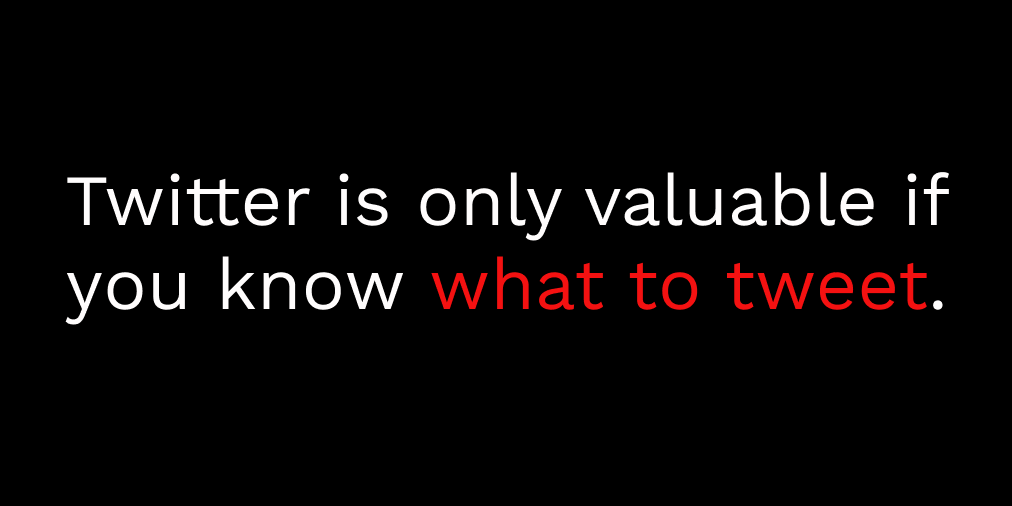 Every great Twitter strategy is rooted in an ability to post tweets that provide value to people — that’s ultimately how you get followers, build relationships, and create value for yourself and your audience.

It happens one tweet at a time, but if you’re not sure what to tweet to accomplish this, the following post ideas can point you in the right direction.

1. Tweet a tip that saves people time, effort, or money.

No matter who your target audience is, they’ll appreciate — and share — a great piece of advice about how to save time, effort, or money.

Tweet a tactic you use to accomplish one of these things. The more obscure it is, the better it will be received.

It doesn’t have to be anything life-changing— it could be as simple as something that saves people 30 seconds when they search for something to watch on Netflix.

This works great with blog posts, but is also effective with videos or podcasts.

You can do this with your own creations or summarize another creator’s work — as long as you credit them of course.

You know that amazing resource you use all the time in your life or work that your audience would also find super valuable?

Don’t keep it to yourself.

Most people only tweet about their success or try to convince their followers they’re perfect all the time.

But the truth is, everyone fails and those failures make us human.

When you share something that hasn’t worked out for you in a tweet, it will get noticed and your audience will bond with you over their own similar experiences.

Tweeting about a fear you have — especially one relevant to your audience — creates an opening for followers to connect with you and share their own insecurities.

This also leads them to become more invested in your future success and root for you to overcome your fear.

This one works whether your stats are impressive or not.

Everyone’s interested in other people’s Twitter stats so sharing a screenshot or summary of yours (you can find them in Twitter analytics) is likely to draw some engagement.

Bonus Tip: When you share your stats, invite your followers to share their own in the replies and thank them for their attention since they’re the ones that helped you achieve those stats!

This is similar to your vulnerable tweets, but these are more rooted in your work than your emotions.

The goal of these next three tweet ideas is to reveal how you create things so your followers will feel a stronger desire to consume them.

Tweet an excerpt from a book you’re writing, a snippet of a song you’re recording, or a photo of some notes in your notebook.

Don’t only share finished products on Twitter — the making of your work can be every bit as compelling.

Every creation is inspired by other creations or experiences, so tweet about those.

If you’re building a company, tweet about the lessons you’ve learned from other entrepreneurs or share how watching your mother inspired you to build a company in the first place.

Good tweets are good, but good tweets that tell stories are great.

What life story reveals the most about who you are, what you’ve learned, or why you do what you do?

The majority of your tweets should be designed to provide more value to your audience than they do yourself, but that doesn’t mean you can’t also promote your own creations.

10. Re-share something you created months ago.

Because of the Twitter algorithm, most of your followers never saw that thing you shared a couple months ago (or even the thing you tweeted yesterday for that matter).

If you want to have an audience, you need to have a newsletter or email list.

It’s simply the strongest connection you can have to your followers and the best way to ensure they’re aware of what you create.

I’m such a believer in newsletters that I’ve got two of them — For The Interested and This Is How I Do It.

Assuming you’ve at least got one, you should regularly post tweets inviting followers to subscribe and — most importantly — give them a good reason to do so.

This may not change your universe, but it can be fun.

Find the first thing you ever posted on Twitter, retweet it with a comment, and invite your followers to reply and do the same.

If nothing else, it gives your followers an excuse to take a little nostalgia trip and makes everyone feel good…and occasionally embarrassed.

The more engaging your tweets, the more reach they’ll get in Twitter’s algorithm so post things designed to generate interactions.

You’re not the only one able to create value for your followers.

When you tweet a question asking for recommendations about valuable books, podcasts, articles, or just about anything else relevant to your audience, you’re likely to get a bunch of replies from people eager to share their favorites.

This creates a valuable collection of recommendations for you and your followers.

14. Ask someone a question.

Tagging a specific person in a tweet and asking them a question that prompts them to share some of their expertise with you and your followers is another great way to drive interactions.

You can try this with anyone on Twitter — it doesn’t just have to be one of your followers. You never know who might answer.

You can also expand it into a full on interview or conversation that plays out one tweet at a time.

15. Ask if your followers have a question for you.

Post a tweet inviting followers to ask you questions about a specific topic (or any topic) and see what you get.

Chances are there are people who would love to pick your brain about something and have just been waiting for an invitation to do so.

Remember how I suggested you do whatever you can to provide value to people?

Well, tweeting something helpful is a great way to do that.

Sharing your expertise helps out your followers and creates a subtle way for you to show off your skills and promote yourself.

This works best if the offer you tweet is relevant to your audience and framed in a narrow or specific way.

For example, rather than just offer to give people feedback on anything they want me to look at, I posted a tweet specifically offering to give them advice about their Twitter profile and tons of people took me up on the offer.

So many in fact, that I turned the advice into this advice about how to get followers on Twitter.

Back in the early days of Twitter, people used to post tweets with #FollowFriday every week to tell their audience who else they thought was worth following.

That’s still worth doing even if you don’t use the hashtag or do it on a Friday.

Everyone wants more Twitter followers, so a tweet in which you highlight someone you enjoy following and recommend them helps out the person you recommend and your followers.

Plus, the person you feature will likely return the favor and spread the word about you.

18. Create a space for people to promote their own stuff.

This works because it taps into another universal truth: Everyone has something they want more people to see and are looking for places to promote it.

Post a tweet that says something as simple as, “Show me something cool you created recently,” and the chances are a lot of your followers will reply with links to what they’ve made and appreciate you giving them the opportunity to do so.

Plus, they’ll probably retweet your tweet because they want more people to see it as well.

Last, but certainly not least, is a category of tweets based on you posting something solely out of the kindness of your heart.

Bonus points if you do it as a video message and include shout outs to a couple specific people in your audience as well.

Most Twitter users either don’t know how or haven’t taken the time to figure out which of their tweets was the most retweeted of all time.

For example, I recently found and shared Gary Vaynerchuk’s most popular tweet of all time.

Finally, I’ll leave you with an incredibly simple way to do something generous for me if you found this article helpful.

Just tweet a link to it so more people will discover it (and thank you for finding it for them).

Proven strategies to grow your audience and business.

FacebookTwitterLinkedInEmail
This Is How I Engage With New Newsletter Subscribers
This is how I built a 2,300 member Facebook group and what I get out of it.
Proven strategies to grow your audience and business.